When I started riding bikes, off road, in the late ’80’s, I saw the bike as an escape vehicle and trails as portals out.  I knew virtually nothing about endurance or backcountry survival, but I’d been raised backpacking and hunting and as such I felt comfortable being ‘out’ in the woods.  Going into the woods has always, from my earliest childhood memories, had positive associations. 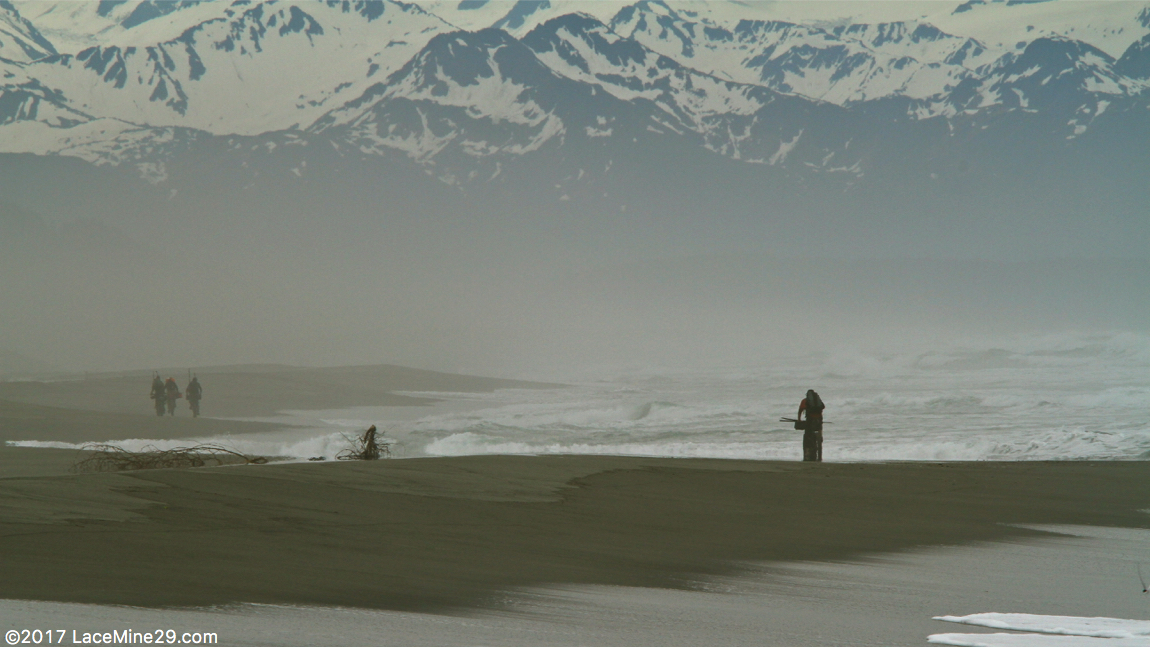 It would take me a decade to fill in the gaps by gaining endurance and confidence to attempt bigger, longer, and bolder trips.  But the wilderness was always there to teach, and humble, and above all else to give perspective.  Being able to explore wilderness by bike is not unlike having a pancreas: I could do without either, but life just wouldn’t be the same. 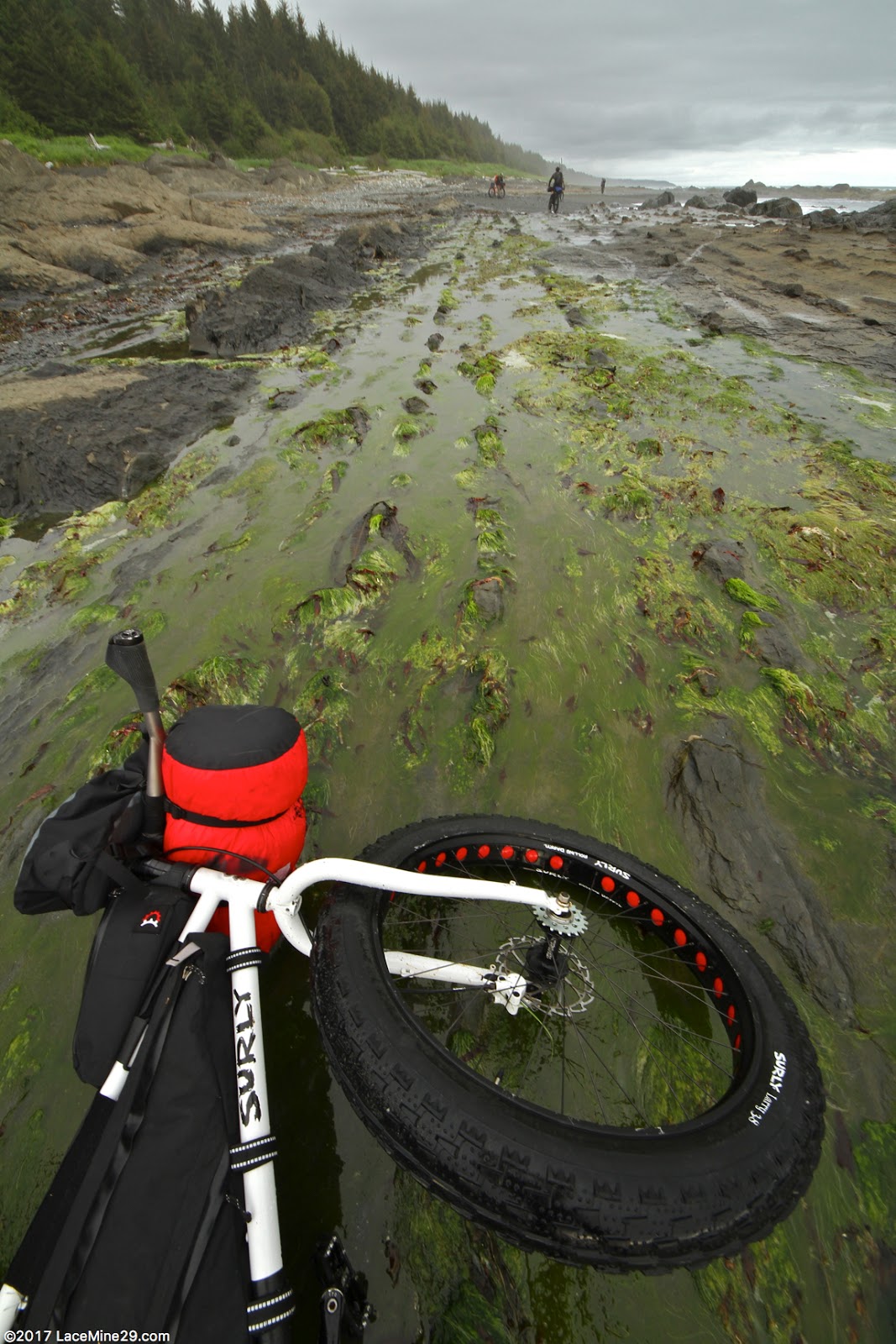 Over the ensuing few decades mountain biking exploded in popularity and has become for all intents and purposes completely mainstream.  One benefit to that is that the bikes and attendant gear have become incredibly light, durable, and capable.  But with all of that has come crowds, and with crowds have come a need to bring the overall level of trail difficulty and remoteness down to suit the least common denominator.  So while it’s true that today you can buy a bike better than anything we ever dreamed of in the ’80’s, for the most part the trails on which you’ll ride that bike are more crowded and less technical than ever before.

That’s a faustian bargain, and not one I’d have made if the choice was mine.  But here we are.

I can’t blame crowds of people for wanting to get out onto trails, but I also don’t enjoy myself when said trails are crowded. Thus as the sport has exploded I’ve continually found myself further on the fringe of any given trail system, and for the past 6 or so years have spent increasing amounts of time completely off the map.  The more time I spend off the map the less I enjoy dedicated trail systems when I come back to them — sort of a self-energizing cycle that seems destined to remove me from said dedicated trail systems entirely.  And maybe that’s good — one less person makes more room for everyone else, right? 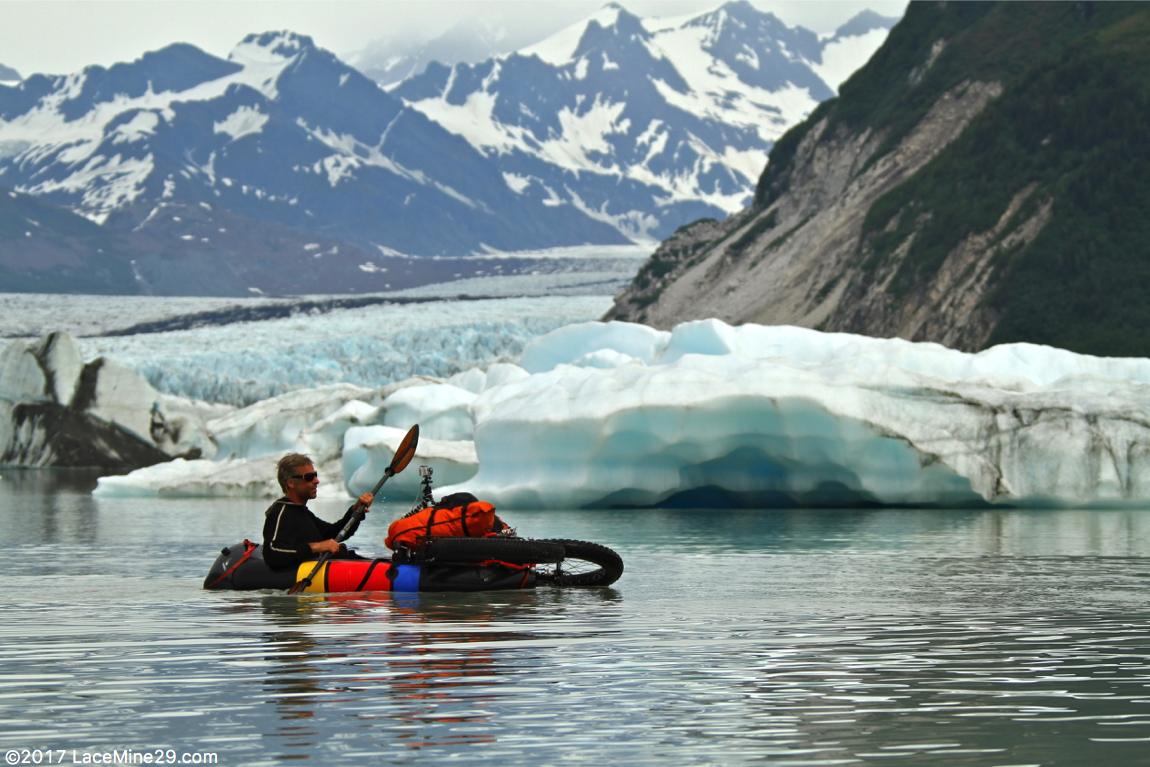 As the arc of my trips has gotten wilder and more remote, I’ve had to learn a whole host of non-biking skills to be able to connect the dots.  None of these has been bigger or more earth shaking than the addition of small boats to the quiver, but it goes much deeper.  The whole concept of gear abstraction was new to me when I started into omniterrain traverses.  Now a paddle is not just a paddle, it’s also the center pole to support a tent, a walking stick, and often a monopod to stabilize the camera for windy or long shots.  My handlebars not only allow me to steer the bike, they store the fuel I need to run my stove.  My patch kit can fix a tire, a tube, my sleep pad, or my boat.  Same with my sewing kit, which can also close a wound.  My lifejacket is my pillow, and maybe a fireside seat at camp.  Get the idea? 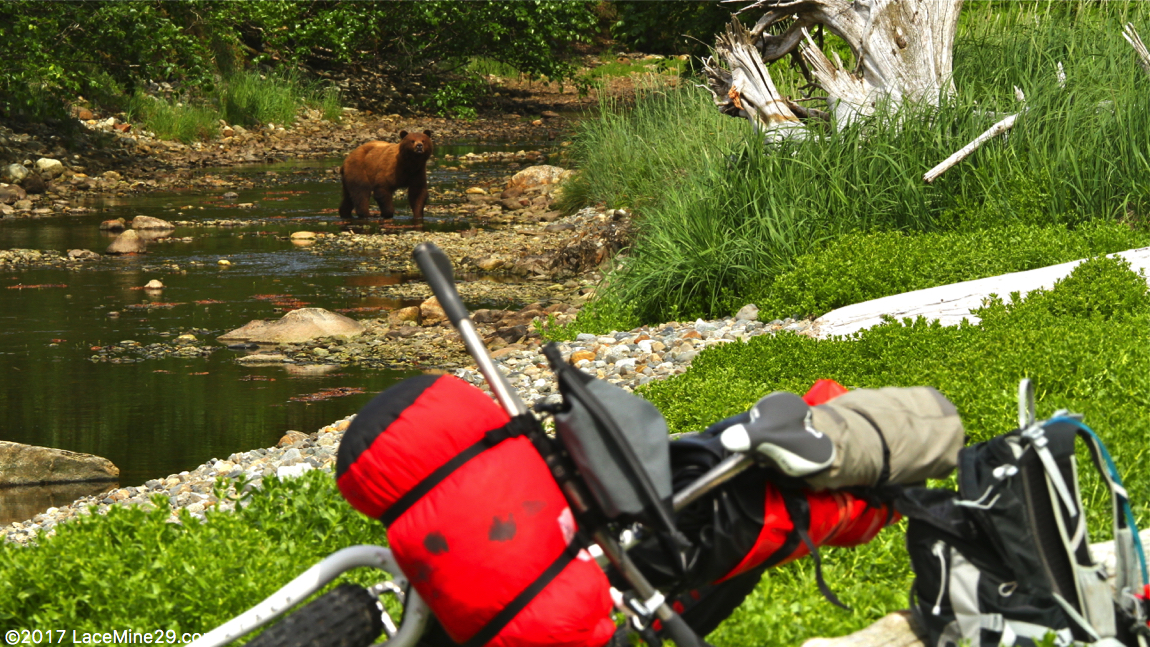 Gear abstraction is necessary because you simply can’t pack every little thing that you think you need.  Typically you make a thing do 2 or 3 or even 4 tasks or you learn to do without.  Take everything you want to take and you end up so weighted down that forward progress creeps to a halt.  Sometimes halting is a great thing — you can see a lot of stuff when sitting still — but halting is no bueno when you need to get from A to B to get yourself back home. 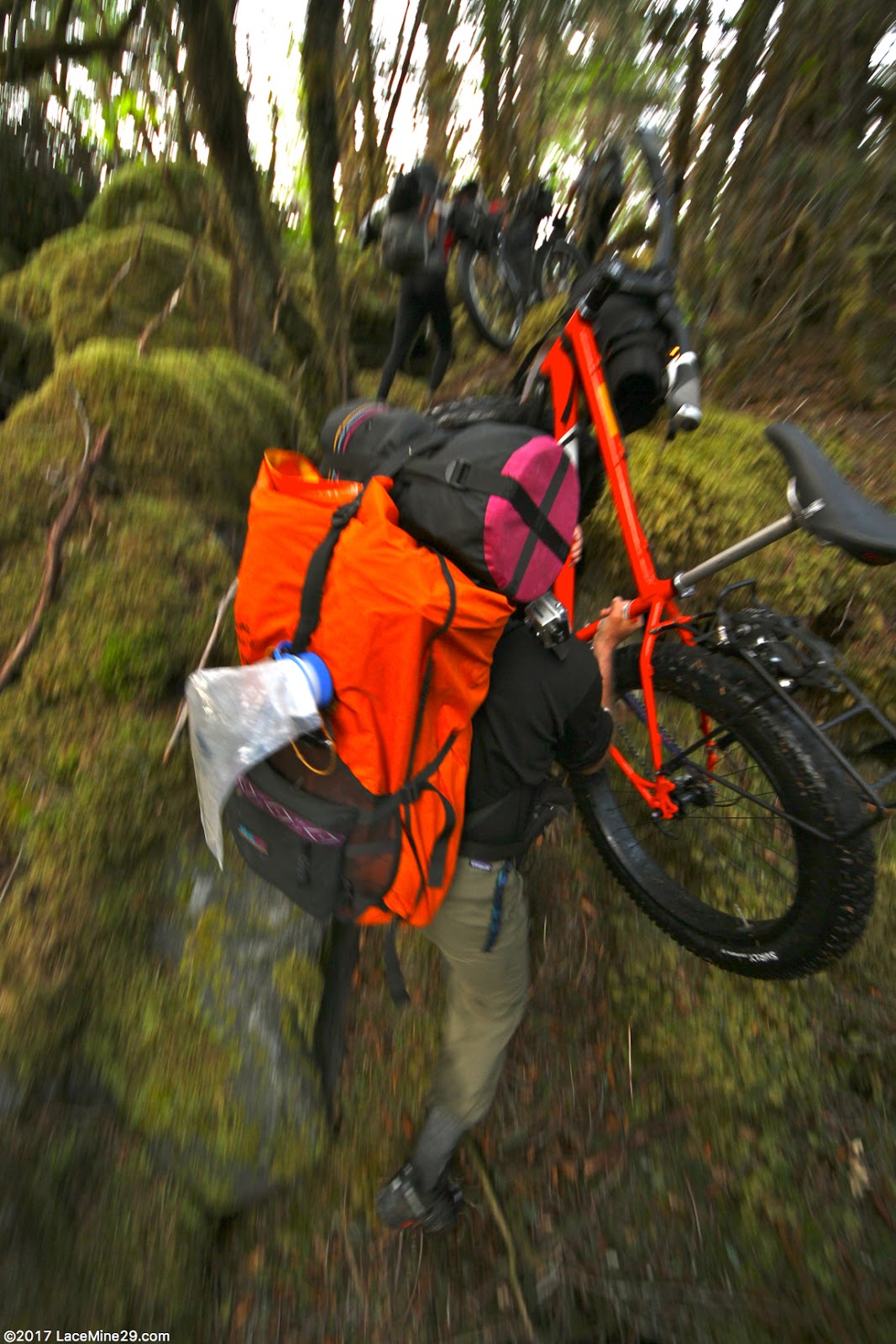 Where am I going with this? 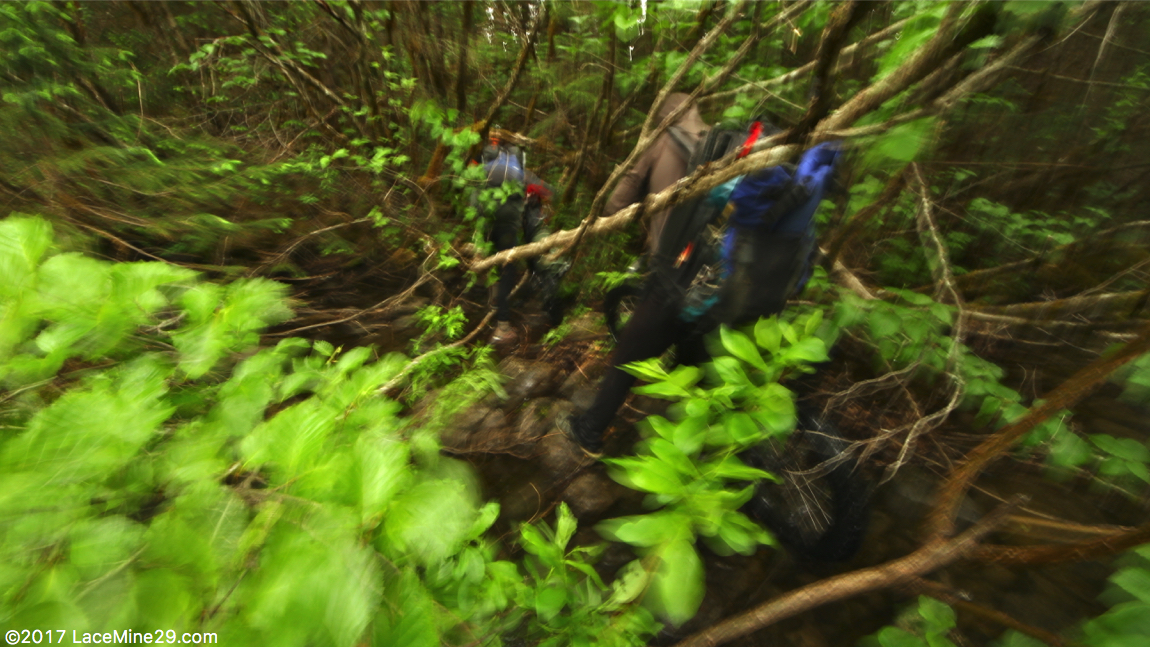 It seems that the arc of my outdoor travels has brought me to a place where I rely more and more on the simplest bike possible.  I still have a mountain bike for trail systems and an expedition snowbike for exploring the world when it’s buried and cold.  But ever since the Lost Coast trip in 2011 I’ve been scheming on and experimenting with what I’ve come to know as an off piste bike.  It’s a bike, so you can ride it on trail or even road if you want to, but the intent of the bike is to do well off road, off trail, on soft surfaces in the desert or mountains or bogs or… or…. 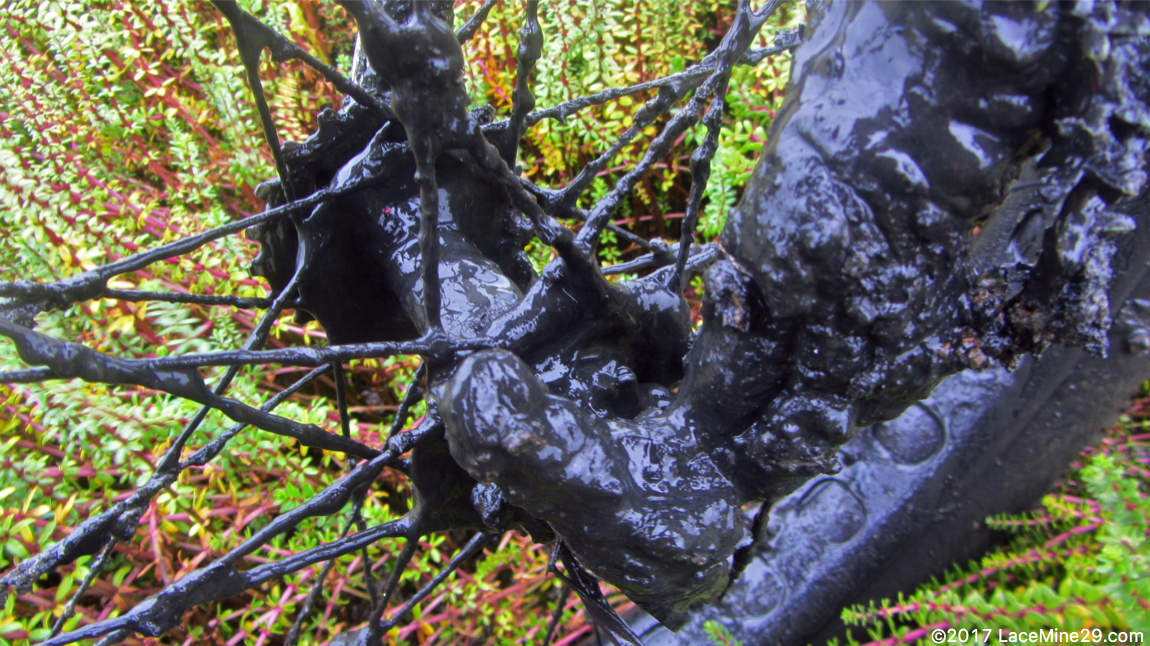 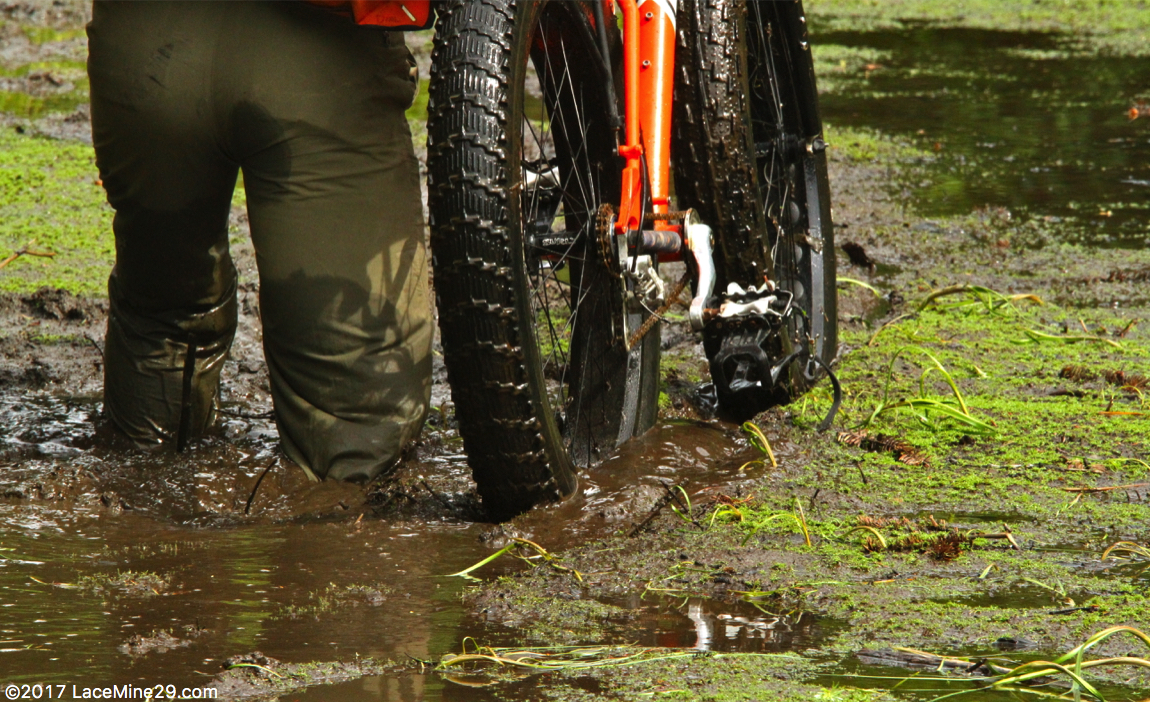 The ultimate off piste bike would blend light weight and durability with the ability to carry a lot of gear and food, and the ability to run very low tire pressures.  It would have a low gear capable of crawling along on sand or bog and climbing reasonable grades, but also a high gear suitable to hauling ass across bedrock or descending packed washes or alpine tundra.  Crucial here is that it has these gearing options but no derailleur to get caught on brush, and no skewed chainline to require frequent maintenance. 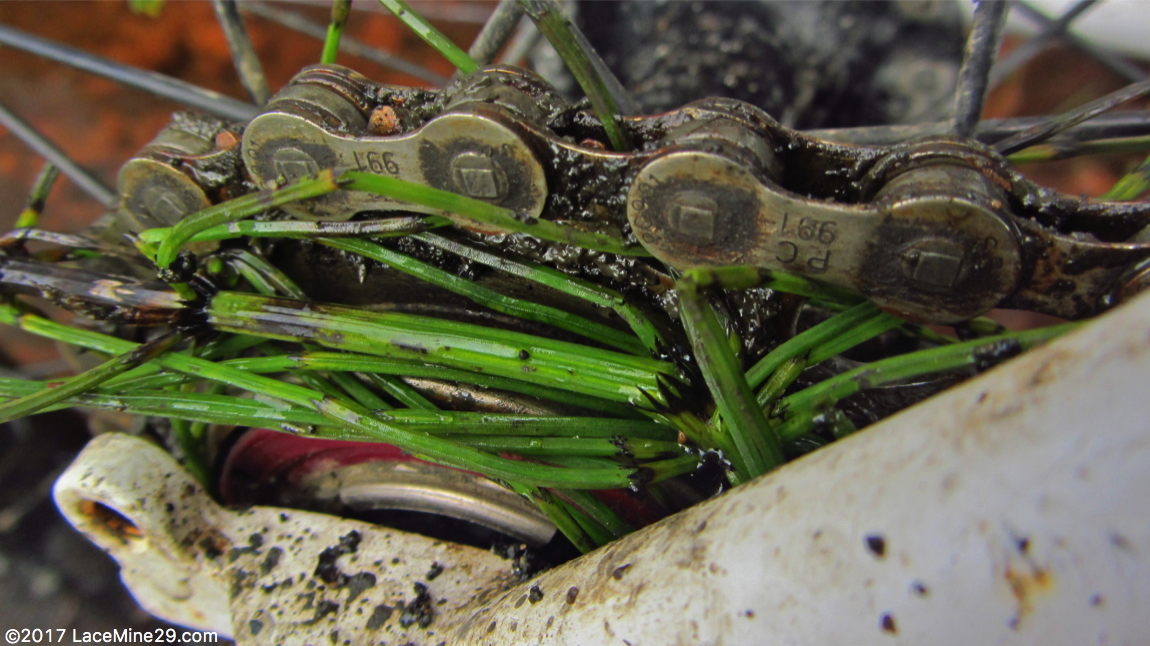 Through several trips I’ve learned that these bikes get treated worse than dirt, and anything fragile or expensive simply doesn’t last. 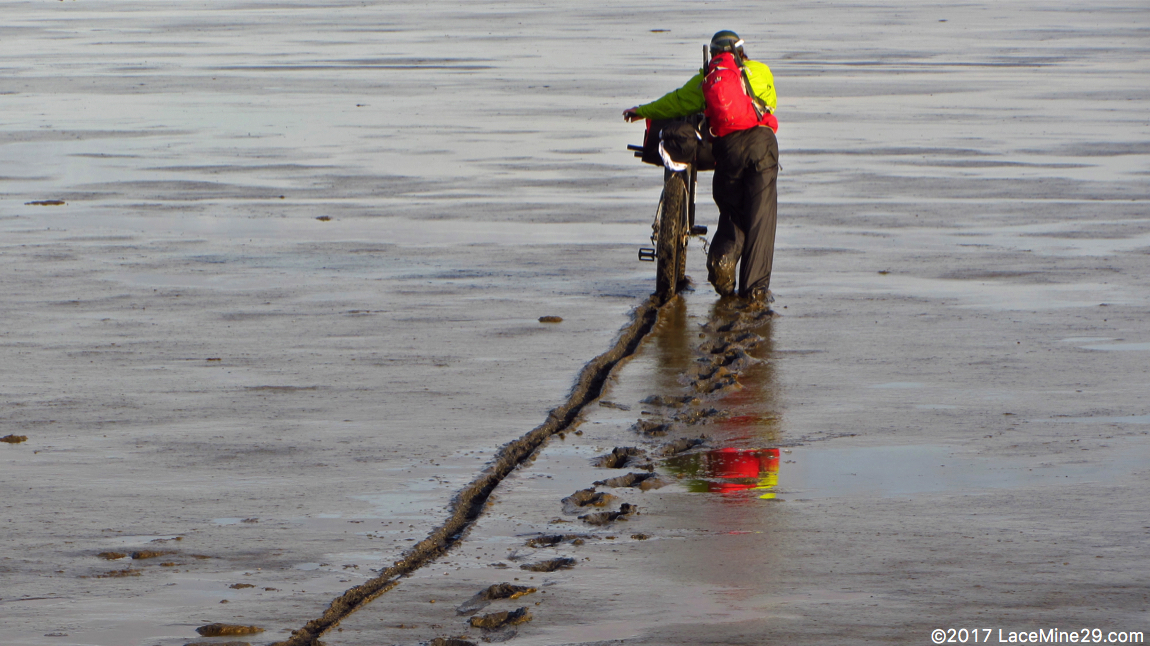 The ultimate off piste bike would have simple, effective brakes that could be easily removed if the trip didn’t require them, and that were somewhat easily repaired yet not that likely to be damaged.  Said bike would need mud clearance in spades, and the ability to survive brief immersion.  It would also need to have few (ideally zero) external cables or housings, such that you could bushwhack with it and not have to worry about snagging them. 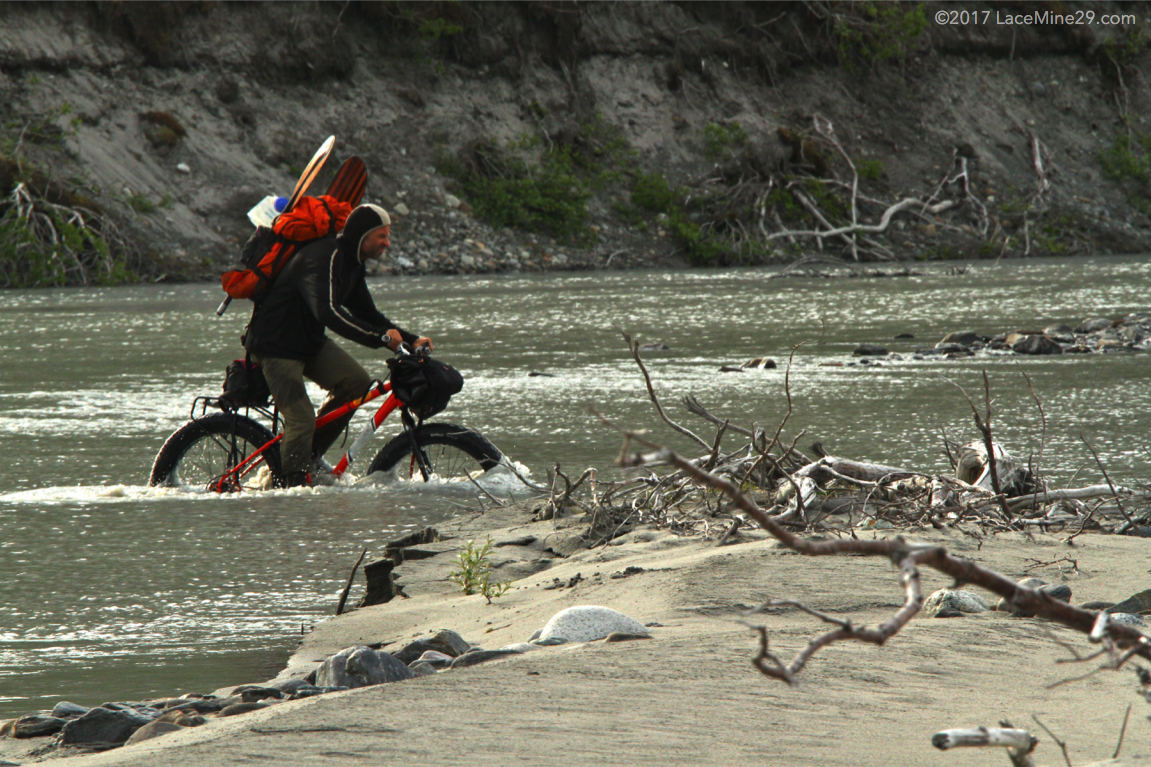 Said bike would have redundant wheels, such that if you killed the primary drive wheel with water or grit or corrosion, you could swap the front wheel to the back and carry right on pedaling. 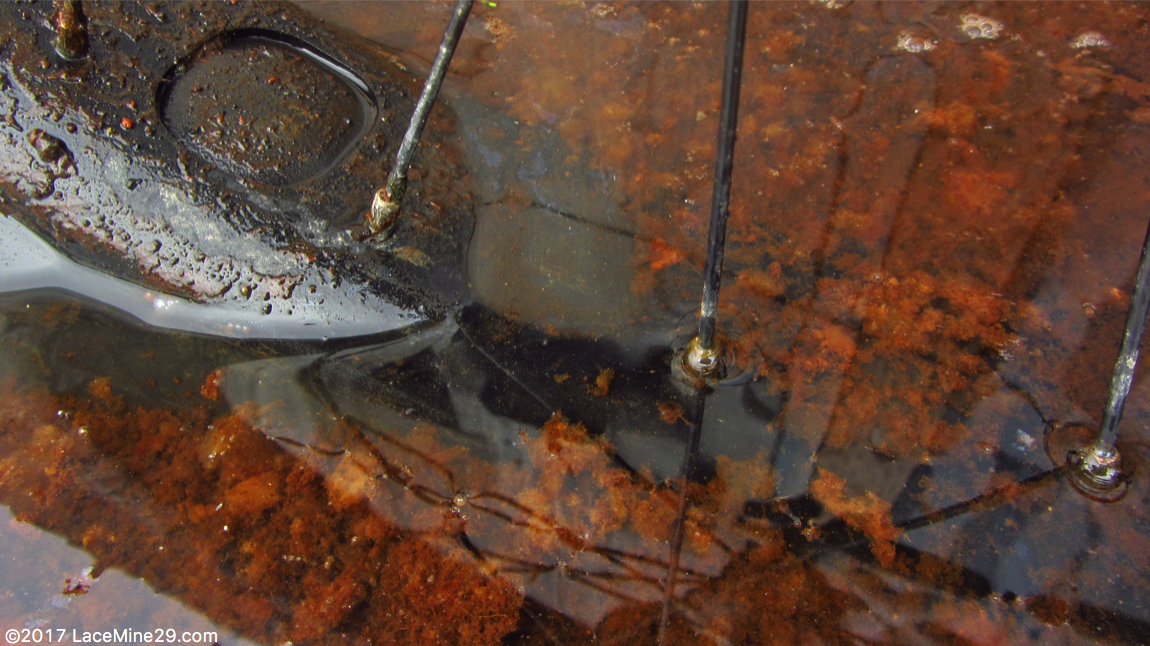 A secondary goal would be to keep it inexpensive enough that you wouldn’t be heartbroken if a trip went so sideways that you had to abandon it, or if an ocean or river crossing devolved so intensely that you had to cut the bike loose and paddle for your life.
I have yet to find the bike that can check all of those boxes simultaneously.  There are always compromises.  But I’m getting closer.

Without further ado I present the Off Piste Pug. 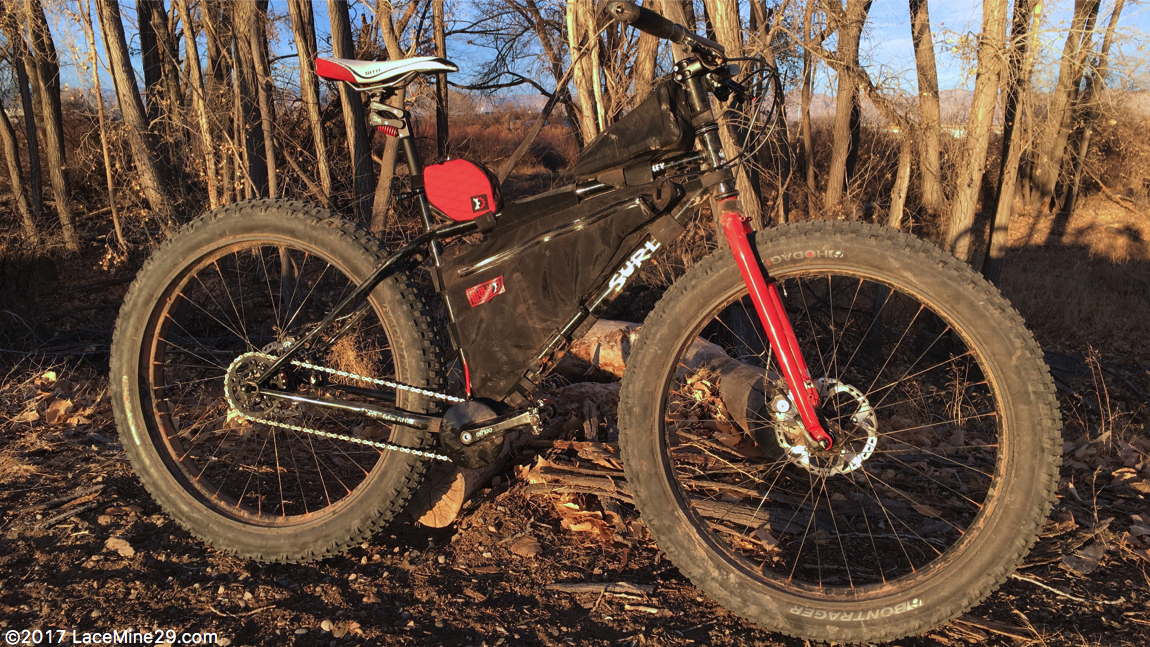 I started with the Surly Pugsley frame and fork because they are inexpensive, durable, and from a certain perspective very light.  I did some experimenting immediately to determine that a B Fat tire will fit — more on that in a bit.
3 or 4 years ago I crowdfunded a Polish company with an innovative and simple gearbox idea.  I’ve got fewer than 30 hours on it so long-term durability is unknown.  But it’s simple enough and with 3 widely spaced gears you’ve got options. The gearbox comes with a 28t ring — how to gear the rear end to match depends on you. 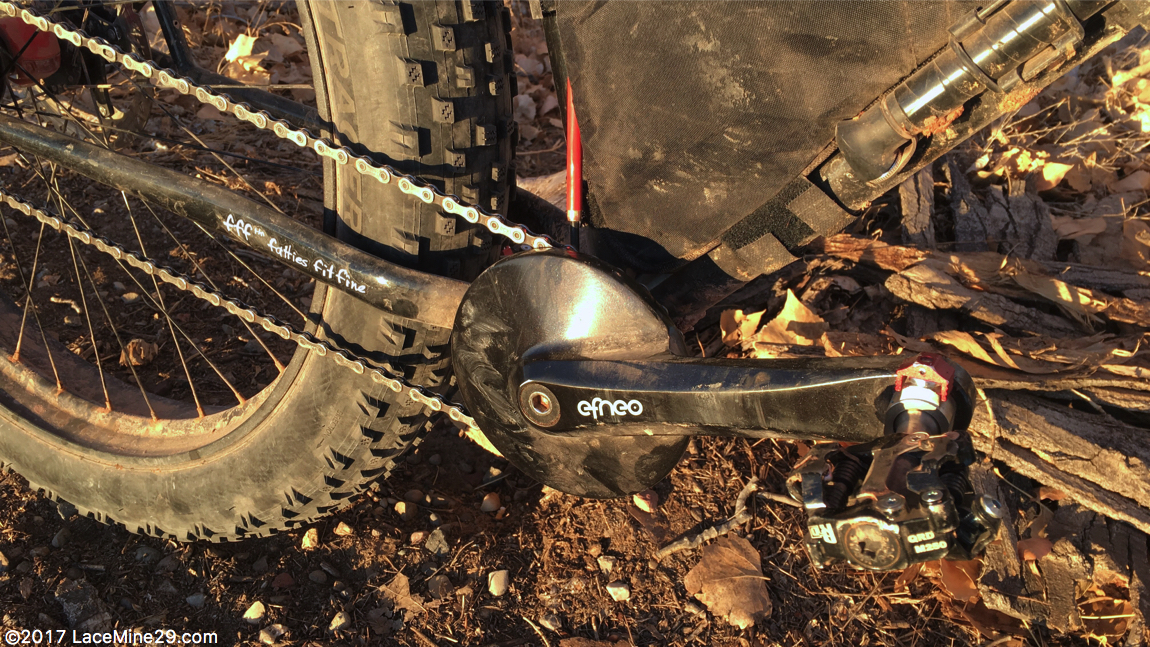 Thus far I’ve experimented with 28, 32, and 34t cogs.  For flatter trips the 28t would be fine.  My first trip out had a fair bit of climbing, and the 28t was too tall given the grades and loads.  Switching to the 34t gave me gearing to climb for days, but with the tradeoff of not being able to wind it out when the grade mellowed and/or the surface firmed.  Thus far 32t seems like a good compromise, though I may yet experiment with a 30t as well.

At this moment the rear cog assembly is needlessly complex (10 chainring bolts and 2 adapter plates!) to arrive at only one gear.  It’ll get simpler. The offset Pugsley chassis was designed way back when for 26 x 3.8″ tires, but Surly being Surly they gave it massive clearance and that forethought has kept the Pugsley relevant all these years.  I offset laced a Bontrager Jackalope B Fat rim to my all-time-favorite DT 350 rear hub, then inflated a Bontrager Hodag 27.5 x 3.8″ tire on it.  I was verily shaking when I installed this combo in both frame and fork, so excited was I at the prospect of it fitting.  Even slammed all the way forward in the dropouts there is plenty of clearance in both frame and fork. 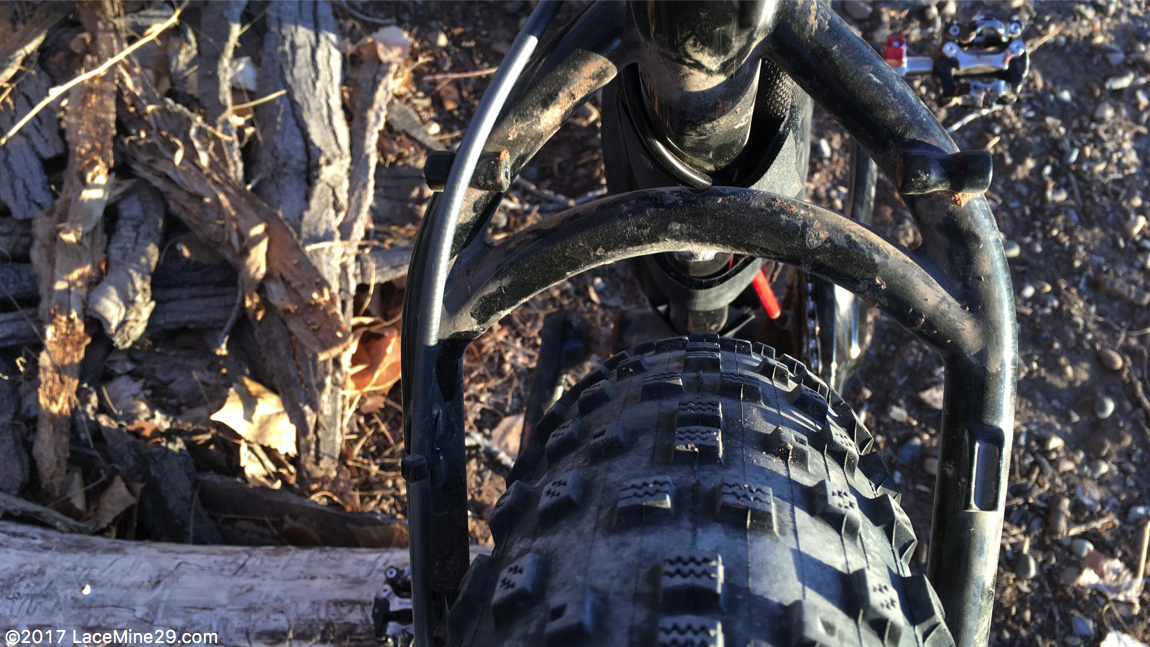 I veered away from the Pugsley for a few years while chasing bigger tires and other shiny things.  But off piste bikes don’t need the biggest tires available.  Thus far I think 27.5 x 4″ is the all-around ideal, but I can also see a need/use for 29 x 3″ on certain trips.  And the Pugs can fit those, too.  Bonus that using either of these taller tires raises the bottom bracket — I always felt that was one of the few weaknesses of this chassis.
Why not 26″, you ask?

I still run 26 x 5.2″ tires on my over-snow flotation bike.  But for anything firmer than that, B Fat tires are faster and more efficient than anything 26″.  Think about why we went to 29″ wheels way back when — efficiency was king.  It still is, and for that and a host of other reasons I’ve abandoned 26″ fat tires for anything other than deep, soft snow.  I’ll talk more about this from other perspectives in the coming months. 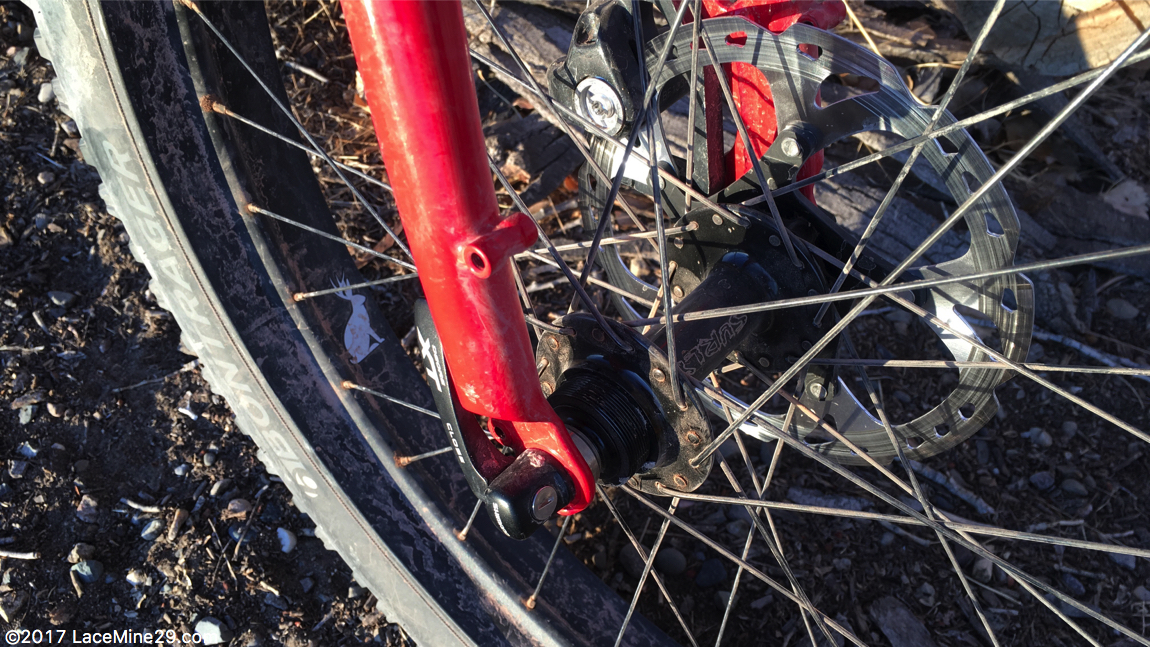 Currently I’ve got a Surly SS hub up front — mostly because it was cheap and I didn’t have an immediate need to spend a lot more money.  I will likely replace it with a DT 350 to match the rear, with a redundant (or close enough) gear.

To keep some semblance of comfort I’ve installed a Bodyfloat post under my saddle.  I’ve got a prosthetic disc in my neck and no desire to add another, and isolating myself as much as possible from the earth beneath my wheels might help keep it that way.  The springs are coil and interchangeable for different rider weights and preferences.  The ones that came with my post worked OK but I kept feeling it bottom out on moderate compressions.  Rather than order new springs and wait for them to arrive, I dug into an old parts box and found a red spring from a Moots YBB.  A crude bench test verified that it was firmer than the stock spring, so I hacksawed it down to size and installed it, figuring what the hell — it’s already here and hasn’t been used in over a decade.  Turns out this brought the spring rate to perfect, and I haven’t seen a need to fiddle with it since. 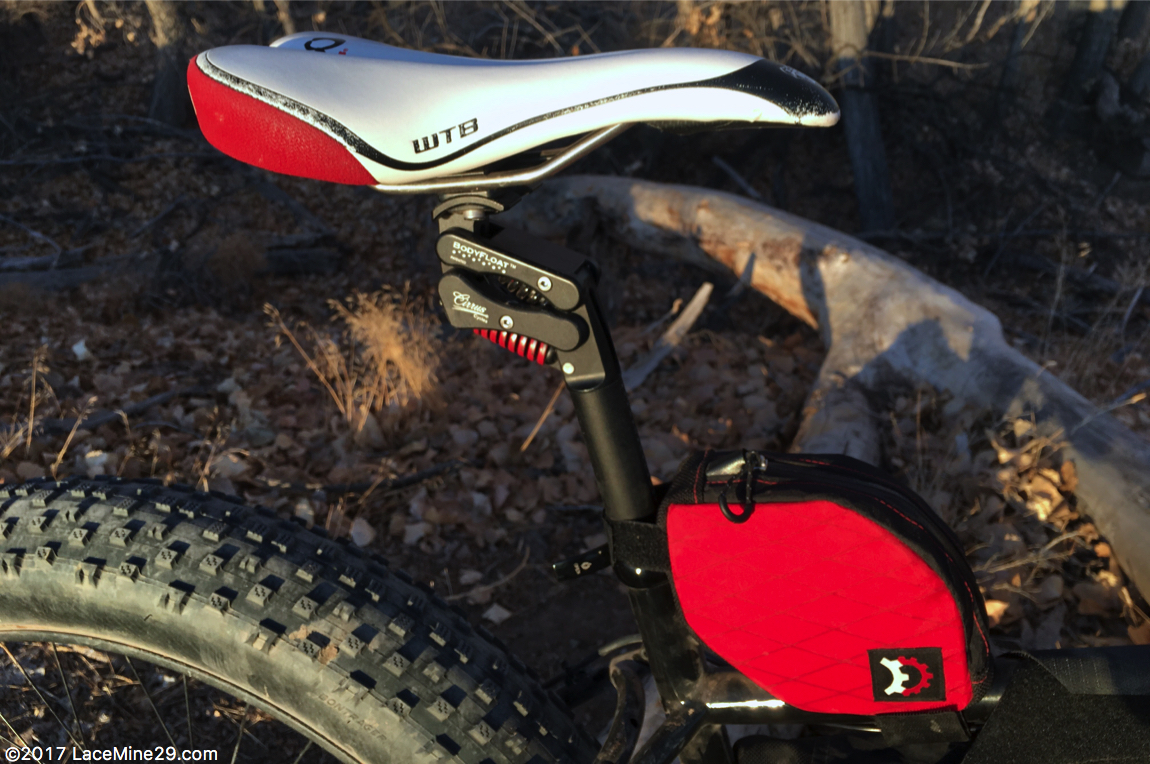 When I first assembled the bike last week I hacked down a thumbshifter and bolted it to the upper seatstay rack mount (look closely, below) as a proof of concept for getting rid of any cable/housing runs to/from the handlebars.  The shifting with this setup worked just fine, although our route had so many rollers that this placement wasn’t ideal.  It would (and will) work great for flatter routes where the need to shift is measured in occurrences per day instead of per minute.  I have since moved the shifter to the handlebars, but long for the day when a trip is so complex and unknown that I feel the need to move it back behind the saddle. 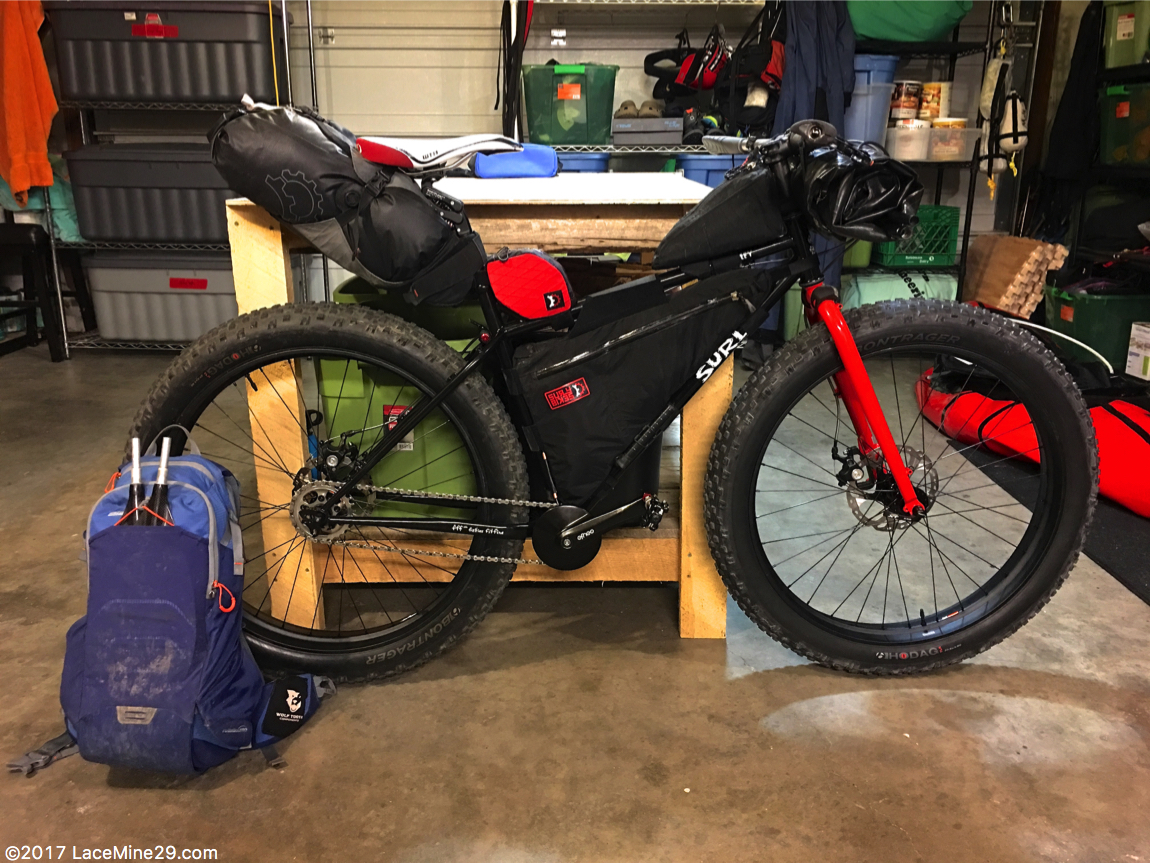 Over the years I’ve acquired a slew of Revelate bags and some of them will likely live permanently on this chassis. Future plans include riv-nutting bottle bosses into the downtube then maybe adding studs to the tires and exploring a few rivers this winter.

This sort of bike will always be a work in progress, evolving to meet the needs of unique trips or as a test sled for experimenting with new implementations of old ideas.